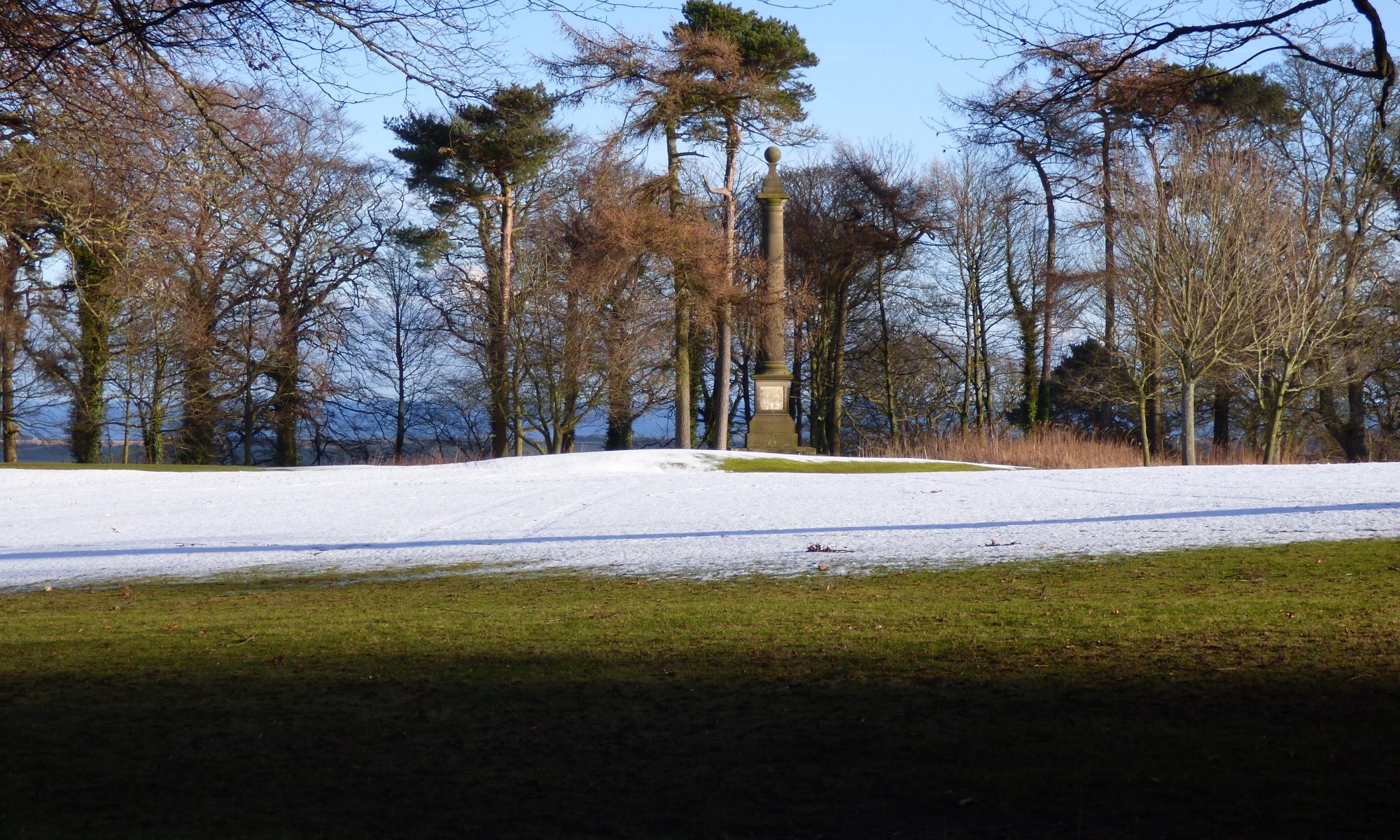 Today, Alnwick golf course occupies much of what was Swansfield Park. At the highest point of the golf course is an iron age hillfort, within whose ramparts is the Swansfield Peace Column. Erected by Henry Selby, it commemorates what was thought to be the end of the Napoleonic Wars, following the 1814 Treaty of Paris.

Erected in a prominent position above Swansfield House, it was originally intended to have been topped by a statue of Peace and Victory, made from Coade Stone, and was designed in accordance with ‘Vetruvius’ plan’, referring to the Roman architect who proposed certain proportions as being aesthetically ideal.

As we now now, the peace was short-lived, with Napoleon escaping his island prison in the spring of 1815 and reestablishing his rule of France, before being finally defeated at Waterloo. The idea of topping the column with the Peace and Victory figure was, however, abandoned, with the finishing feature instead being the simple ball we see today.

The Coade Stone figure was erected on the lawn of the old Swansfield House but there is no trace of it today.

The four faces of the column’s base each carry an inscription, which are to varying degrees deteriorating.

For the record, the inscriptions are:

England has saved herself by her firmness, and Europe by her example. Pitt

This Pillar was erected by HENRY COLLINGWOOD SELBY, a Magistrate of this County, to commemorate the persevering and victorious efforts of the British Empire by sea and land during an arduous struggle of XX years, and the signal successes of the Powers united with this Country at the close of that eventful period; the expulsion of the French from Russia after the burning of Moscow in MDCCCXII, the defeats of their armies in Germany in the memorable campaign of MDCCCXIII, the invasion of France, the surrender of Paris, the downfall of Napoleon Buonaparte, the reestablishment of the Bourbon monarchs, and the restoration of Peace to Europe in MDCCCXIV.

Vice-Admiral HORATIO VISCOUNT NELSON of the Nile defeated the French and Danish Fleets at Aboukir and Copenhagen, and fell in the decisive victory of Trafalgar achieved over the combined Navies of France and Spain in MDCCCV.

Field Marshal THE DUKE OF WELLINGTON having vanquished the Armies of France in Portugal and in Spain, at the Battles of Vimeira and Talavera, Salamanca and Vittoria, drove them beyond the Pyrennees, and advancing to the banks of the Garonne again overthrew them under the walls of Toulouse in MDCCCXIV.

The Right Honourable WILLIAM PITT directed the councils and energies of his country during the first years of a just and necessary war, and died in MDCCCVI, having established that wise and vigorous system of policy, which succeeding statesmen, emulous of his example, steadily pursued till they secured Independence for the Nations of the Continent and a Peace of unparalleled glory for this empire.

The Peace Column is within the grounds of Alnwick Castle Golf Club. The golf club are happy for people to walk up to see the column, but it is important to get permission from the club house before walking on the course.