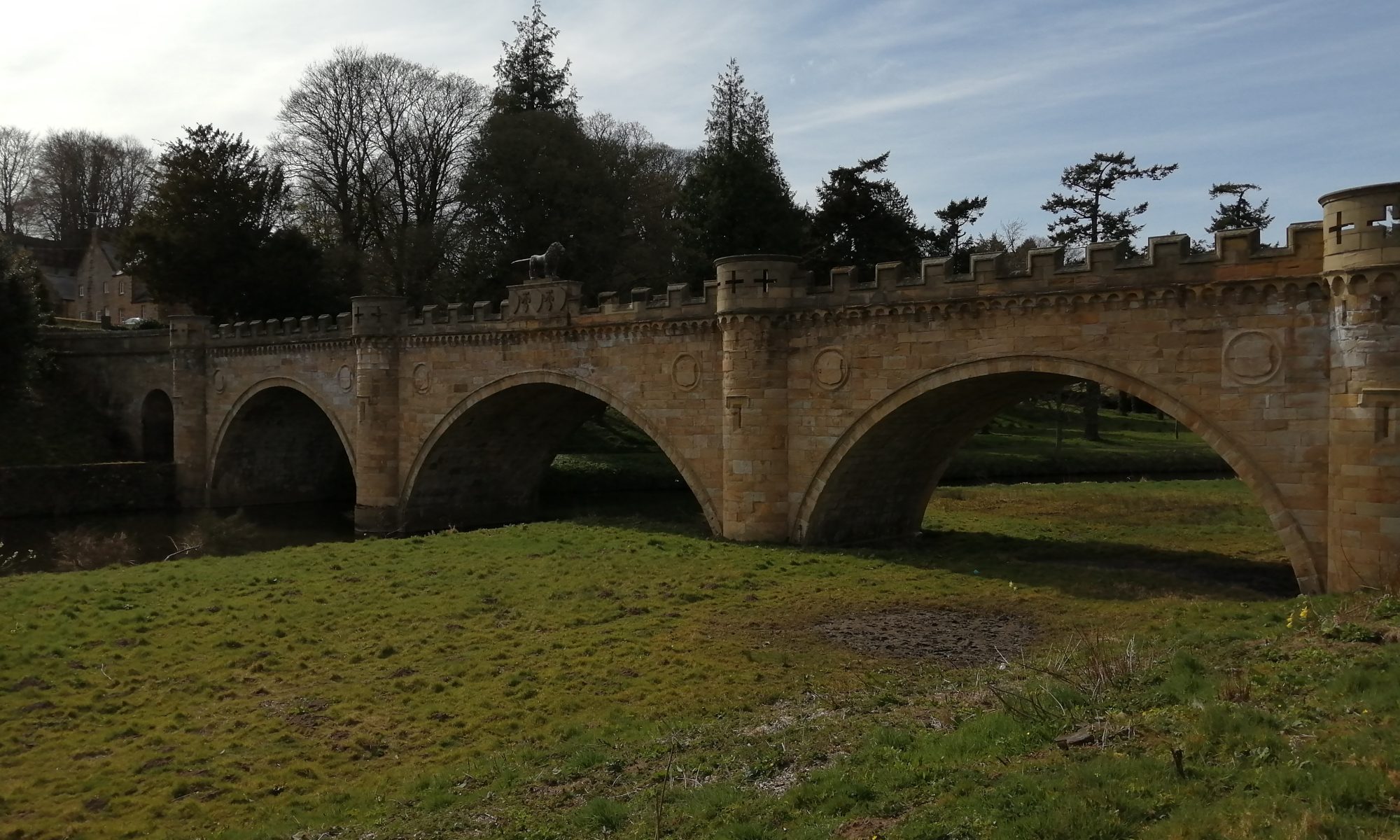 Grade I Listed: HE Record

Tate tells of an ancient bridge which spanned the Aln, just downstream from where the Lion Bridge now stands. In 1347 it was “ruined and broken”, and Edward III granted the tolls for three years to the men of Alnwick, so that they could repair it and pave the town. Whether it was then re­paired or rebuilt, it seems to have survived until 8th Novem­ber, 1770, when a great flood washed away much of the river bank. The south end of the bridge sank and became dangerous. On the 10th of December, the corporation paid John Shepherd 3s. to watch the bridge all night and warn people of the danger. Then on the 15th of December the south arch fell in, leaving the others tottering. Two years later, the problem had only been partially addressed, and the bridge was then described as “in a ruinous condition”, and “the passage over it hazardous”.

The present bridge was then built – some twenty or thirty yards higher up the river than the old bridge; with the foundation stone being laid on the 21st August, 1773.

The bridge spans the river in three arches with two inter­mediate piers. It was designed by Robert Adam (1728 – 92), one of the most important British architects, who normally incorporated design ideas from ancient Greece and Rome into a Neo-Classical style.

For Lion Bridge, Adam used “Castle Style”. He designed more that sixty buildings in this style, but generally used it for country houses where it was popular with clients. The Lion Bridge is a rare ex­ample of Adam using Castle Style for a public building, though he did propose a similar style for a prison, and later for a more elaborate bridge that was never built, to link Princes Street and Calton Hill in Edinburgh.

The construction of Lion Bridge occurred at the same time as Adam’s major renovations of the interior of Alnwick Castle for the 1st Duke of Northumberland. Adam’s work on the castle was not typical of the Neo-Classical style, for which he was better known. In the 19th century Algernon, 4th Duke of Northumberland replaced much of Adam’s work when Anthony Salvin removed Gothic additions and other architectural work, and Luigi Canina redecorated in Italianate style.

Details on the bridge are reminiscent of a child’s toy fort, and the stone balustrades on the approaches are carved to look like the sharpened stakes of a wooden palisade. These are intended to amuse, and relate to the architecture of the Castle.

The sculpture of the Percy Lion, that gives the bridge its name, is also from 1773 by John Knowles. It is cast in lead, on a sandstone plinth which forms part of the bridge parapet.

According to the Historic England Listing entry, there was supposedly once a matching unicorn on the west side of the bridge (symbolizing Scotland). In the late 1980’s the lion |was knocked into the river by a fairground wagon crossing the bridge.

In 1917 a sergeant in the Northumberland Fusiliers lost control of his bicycle on the Peth and crashed into an am­bulance on the bridge, break­ing both of his legs. Two soldiers in the ambulance were also injured, and the ambu­lance hit the bridge, causing further damage.

Two crashes that happened in 1937. In one the lorry ended up in; the river, upside-down. The driver had to climb out of the upturned cab, and was lucky to escape with his life.

Ten feet of the parapet were damaged, and the road had to be closed when an articulated lorry failed to climb the The Peth, and ran backwards into the bridge on its way to Manchester in 1950.

In October 2008 the bridge was closed to traffic for four months following flood damage. An inspection by divers on behalf of Northumberland County Council had discovered that the foundations under the central support had been washed out by severe flooding.